We are thrilled to share our promotional Trailer, taken on the tour of 'Gorilla Gardening' by the very talented film maker Barney Witts. 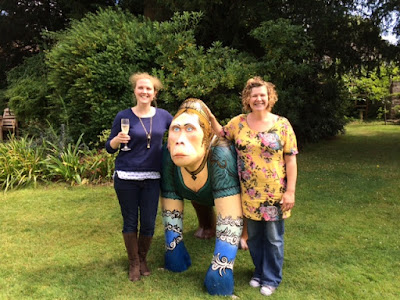 Thank you to everyone who joined us at the Gorilla Garden Party last week. Plus an especially big thank you to Trish and Brian Machin for hosting the party in their beautiful garden. 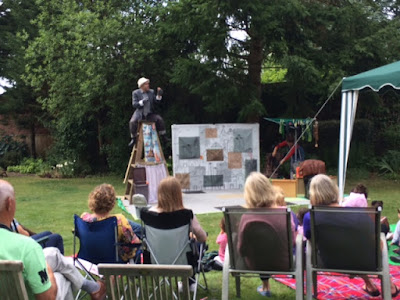 We were very lucky with the weather, with the performance being able to take place outside in the sun. We all then explored the gardens, tucked into a yummy afternoon tea and had our photos taken with Doris the Gorilla.

A wonderful afternoon had by all! 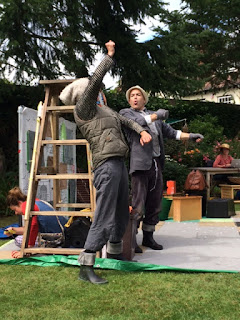 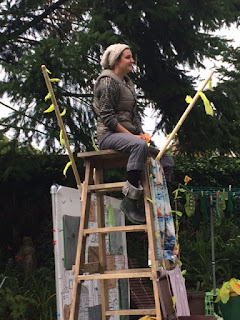 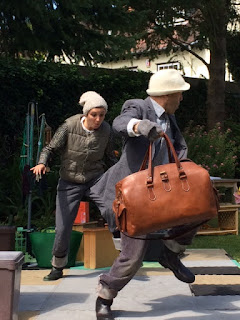 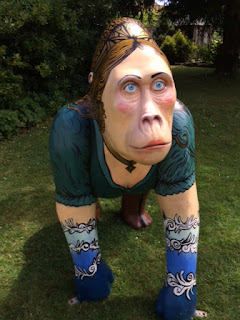 Much Thanks to our funding partners, the Ernest Cook Trust and Arts Council England
Posted by Unknown at 07:49 1 comment:

And we’re off!  After slightly less than three weeks devising and rehearsing (playing, singing dancing and general silliness) we are ready.

I have to say it’s bitter sweet as we take this next step. Incredibly exciting to take to the stage and tell our story to thousands of children all over the country. However it is a little sad to not be taken the whole team with us - Harriet, De Winton (Designer),  Sarah Moody (Music Director), Anna Croxson (Movement Director) , Mark Parrett (Puppet Director) and of course the captain of the ship Director Heidi Vaughan. Without meaning to have a theatrical lovey gush, it really has been a true pleasure to work these wonderful and creative folk and we will miss them when we’re on our Gorilla travels. I also must do a shout out to the gorgeous Arthur, who provided a constant beam of light from the corner of the room even on the most tired and rainy days during rehearsals. 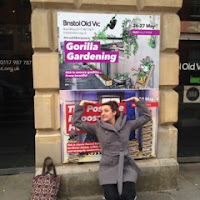 I am particularly chuffed to opening at The Bristol Old Vic Theatre. As the only member of the cast who is Bristol born and bred it feels all the more significant. I did my first professional production in The Old Vic Studio when I was I have worked there on and off over the years, whether it’s been running workshops, serving coffee, performing in scratch nights or tearing the tickets! I can’t see a better venue to start our journey. The building has so much history both personally and for Bristol and it's always a privileged to be in it. Bring it on! 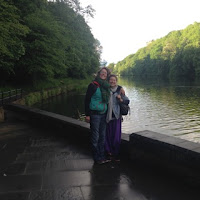 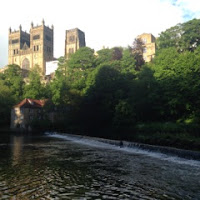 Much Thanks to our funding partners, the Ernest Cook Trust and Arts Council England

First Day on the Road

First day on the road: Armed with a van packed with set, snacks and enthusiasm we chugged up to Durham's Gala theatre. What a lovely theatre! The space overlooked a magnificent view of the city and countryside beyond. Such a treat to perform in picturesque surroundings and the people of Durham are a cracking bunch. We did three shows on the trot and were met with small but very receptive audiences. At one point all of the children clambered onto the stage; far too intrigued by the plant puppet to stay seated! It was nearly carnage and we were going to have to bat them away with brooms, until better judgement prevailed and we saw what fun they were having. This is exactly the kind of interaction the show encourages and we were pleased the parents allowed them the freedom. They seemed to really enjoy the playtime afterwards and a few of them offered us sweeties...high praise indeed!
"It is good to have an end to journey towards but it is the journey that matters in the end." - Ursula K. LeGuin. You're welcome guys. I'm not sure if Ali (stage manager and van driver) shared the sentiment. It was mammoth drive there and back to a Groove Armada soundtrack and little navigational help from the back of the van.. good old Ali. She also introduced us to the BEST SERVICE STATION EVER on the M5. It's a destination spot guys. Another memorable extract from the trip was the B&B's resident dog, Charlie. He was a smidgen pongy and completely blind. Moving the hazardous object was the order of the day as he would shuffle around, occasionally bumping into wardrobes. Bless him. 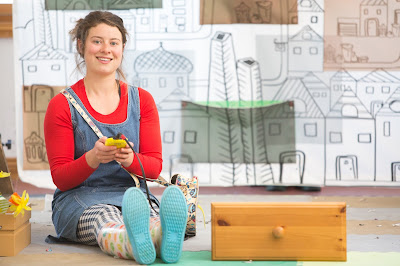 That's all folks. Oodles of love from Hebe.
Posted by Unknown at 06:33 No comments: 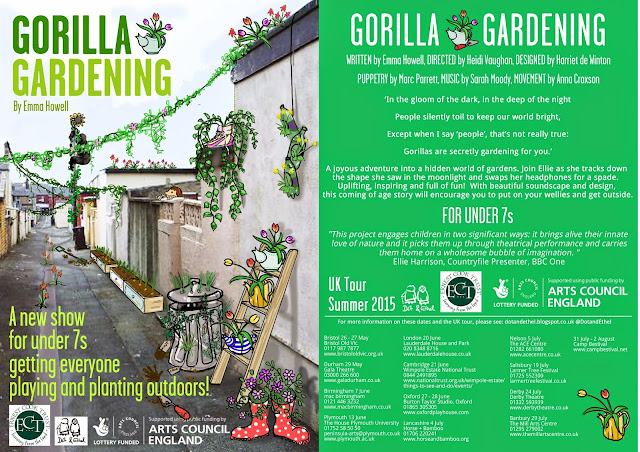 Gorilla Gardening is now on tour. Take a look at the tour dates and come and meet our green fingered gorillas.

We are absolutely thrilled to be able to announce that we reached our Crowdfunding target of £1500. We can now take our fabulous show Gorilla Gardening on the road!
Thank you so much to everyone who supported it through sharing it on social media and telling their friends. But an especially big thank you to our amazing 48 backers who really have helped bring this project to life! 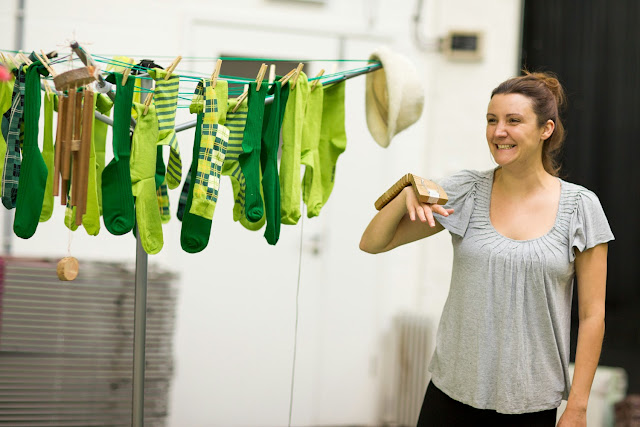 My first day in rehearsals - time to try out some puppet ideas. In previous meetings with Heidi and Harriet we'd discussed how the puppetry might work in the show and how appearances by the puppet creatures could act as links across the entire narrative. The 'ally' cat in particular could be a companion for Ellie. I made a rough mock-up cat with a lovely springy back and animated tail which could be operated by 1, 2 or 3 people. We had it leaping around the stage, walking along the fence and climbing a ladder. Everyone loves the cat! It moves so gracefully. It's one of my best.

Sarah Moody had a brilliant idea about turning musical instruments into puppets so we tried fixing bits and bobs to various percussion thingys and twangy noisy devices... and this is what we came up with; A ludirously convincing frog, a stomping beetle shaker, a rattling centipede and 2 wavering bees attached to instruments called tumbi(?) - you twang the steel string and flex the sides and it makes a wobbly springy sound. Working alongside movement director Anna Croxon we started developing sympathetic body shapes and reactions for the 3 performers to help give the puppets more impact. This is an aspect of puppetry that often gets overlooked but Anna completely gets it!

I was also given the job of developing the plant growing moments. Heidi was keen to avoid twee little flowers popping up on sticks; she had in mind something like time lapse photography where the plants slowly expand into being with tremendous latent force. We played around with a vine creeping along the floor and a sunflower growing up the side of a washing line. I also wanted to have a pumpkin grow before your eyes so I rigged up a polythene bag with tubes and a one way valve so it could be inflated. We played around with various leaf growing moments the most successful of which was the step ladder sprouting broom handle branches with little popping out leaves.

Even at this early stage the puppet moments are working well and seem to be in tune with Heidi and Harriet's vision. I'm enjoying the process a lot... It's experimental and imaginative and I wish I could work like this all the time! 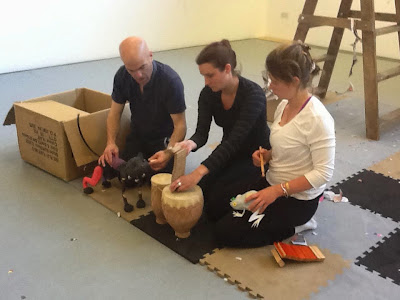